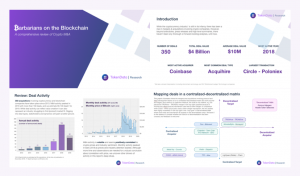 Financial vs Strategic: Not all M&A is created equally

We can split deal activity into two categories: Financial and Strategic M&A (description in table).

2018: Financial M&A with obscure motives. As shown in the graph below, Financial M&A outpaced Strategic M&A in 2017 and matched it in 2018. A closer look at the Financial M&A activity shows that many acquisitions consisted of a) defunct non-crypto companies turning into crypto investment companies (e.g. Long Island Blockchain) by acquiring small cryptocurrency startups and b) reverse mergers, in which private crypto companies acquired listed shell-companies.

2019: Strategic M&A continues its strength. The opportunistic and sometimes obscure Financial M&A disappeared during the market correction in 2018 and has been absent in 2019. Strategic M&A has held up well, with a projected 70 deals for 2019.

Sectors: Funds & exchanges in the front seat of acquisitions

“Pay to Play”: Non-crypto companies have been acquiring cryptocurrency startups to increase their industry presence. The majority of these acquisitions are talent-focused acquihires. For example, Facebook has acquired two startups (Chainspace & Servicefriend) for its Libra and Calibra development efforts.

Crypto Infrastructure & Mining: Crypto infrastructure companies and development teams of protocols and decentralized applications (dapps) have also been active, with 40 acquisitions. Mining companies were very active before the market correction in 2018, but have been largely absent in 2019.

Exchanges: Coinbase is the M&A powerhouse

Coinbase is the leader in Strategic M&A with 16 acquisitions. While the company’s M&A strategy mainly consists of acquihires and technology “tuck-ins”, it has also engaged in two significant acquisitions such as Earn ($100M) and Xapo’s custody business ($55M).

Kraken and Coinsquare follow Coinbase, with Kraken involved in 7 deals and Coinsquare in 5 deals. A significant transaction was Kraken’s $100M acquisition of Cryptofacilities, a regulated cryptocurrency derivatives exchange based in the UK.

Where’s Binance? Despite its size, growth and breadth of offerings, Binance has engaged in “only” 3 public acquisitions (Trustwallet, JEX, Wazirx) so far. However, Binance does have significant investments in other crypto companies and partnerships that have the same strategic effects as M&A.

M&A as a way to overcome regulatory hurdles: M&A is used by cryptocurrency exchanges as a strategic tool to gain regulatory approval in certain jurisdictions or for certain products. They do so by acquiring a company which has the relevant regulatory licenses. We count 15 deals (some examples below) that have taken place since 2018 and explicitly mention regulation as an important aspect of the acquisition in their announcements.

To understand the rationale of each acquisition we have categorized all acquisitions into three different strategic types.

Talent & Technology Tuck-Ins* are the most common type of strategic M&A within the cryptocurrency industry and have been steady throughout 2018 and 2019. The focus on acquihires and early-stage technology acquisitions suits nascent industries.

*We use the term as coined by Coinbase COO Emilie Choi in various interviews on M&A in the space:
https://www.theblockcrypto.com/post/25055/emilie-choi-coinbase https://www.businessinsider.com/coinbase-crypto-bitcoin-acquisition-strategy-emilie-choi-2018-4?international=true&r=US&IR=T

Horizontal mergers represent only a quarter of all strategic deal activity. However, they make up more than half of strategic deal value as they typically represent the consolidation of larger and more mature businesses.

Crypto-native M&A concepts: However, as the current batch of cryptocurrency networks and blockchain projects mature – and the degree of decentralization increases – new stakeholders, concepts and mechanisms will appear in the M&A process. We have summarized a few concepts and mechanisms of “Traditional M&A” and speculated about their crypto-native or “Decentralized M&A” counterparts.

Live experiments: In addition, we are seeing some attempts to put theory into practice, as evidenced by the M&A activity by development teams and exchange of tokens instead of equity and/or cash. We look at these examples in the next sections.

M&A by protocol and dapp projects

While true “Decentralized M&A” is yet to happen there has been significant M&A activity from the development teams of cryptocurrency networks. Many of these development teams aspire to create a decentralized protocol or application and M&A can be a useful strategic tool as they seek to transition. We have identified 3 different deal types by these teams.

2019 saw the first cases of token mergers. After the ICO and token-sale hype of 2017 it was a matter of time until overfunded crypto projects would struggle with traction and look to merge with one another. We found two examples:

Although both mergers weren’t strictly speaking “decentralized” as the projects involved were traditional companies, they are relevant from a token perspective.

A detailed look at the COSS-ARAX token merger can be found in the full report:

Mapping deals in a centralized-decentralized matrix

This graphic illustrates where the mergers and acquisitions involving protocol and dapp development teams sit on a centralized-decentralized matrix (for both acquirer and target). Since there is no objective measure, the scale is only relative, e.g. we placed the TRONAce – TRONDice merger in the top right quadrant because it involves two dapps and the mechanism used was a token merger. In comparison while COSS – ARAX (LALA) also used a token merger mechanism, the two entities were highly centralized. In the top-right is the hypothetical case of Decentralized M&A where both entity and mechanism fit squarely in the decentralized camp. We leave it to the readers to consider whether the rubicon of decentralization has been crossed, and feedback is welcome!

To summarize, we have analyzed 350 deals from 2013-2019 in order to understand what role M&A plays within the cryptocurrency industry. Looking to the future we have considered what “Decentralized M&A” could look like, and assessed transactions that provide clues.

Volatility M&A activity is volatile and shows signs of positive correlation with cryptocurrency prices. The extreme price run-up in late 2017 drove a surge in sometimes opportunistic Financial M&A. The subsequent price collapse and recovery have created a climate in which Strategic M&A prevails.

Funding Most cryptocurrency companies are funded by venture capital firms. In the absence of a large IPO in the foreseeable future, and the young vintages of most crypto VCs, M&A is not a fund-returning exit strategy yet.

Companies & Strategy Cryptocurrency exchanges such as Coinbase and Kraken have emerged as the most prolific strategic acquirers in the space. Acquihires (talent) and technology focused acquisitions have been the most common strategic type, and we expect this to continue for the foreseeable future.

Regulation There have been clear signs of exchanges using M&A to meet different countries’ regulatory requirements. With the regulatory landscape evolving at high speed, M&A will become an even more attractive strategy for crypto companies in their quest for global regulatory compliance.

Decentralization True “Decentralized” M&A has not happened yet. However, development teams have been actively acquiring companies to help them transition from a centralized starting point to a more decentralized end-state. Moreover, 2019 saw the rise of token mergers, which could be an important mechanism in Decentralized M&A.