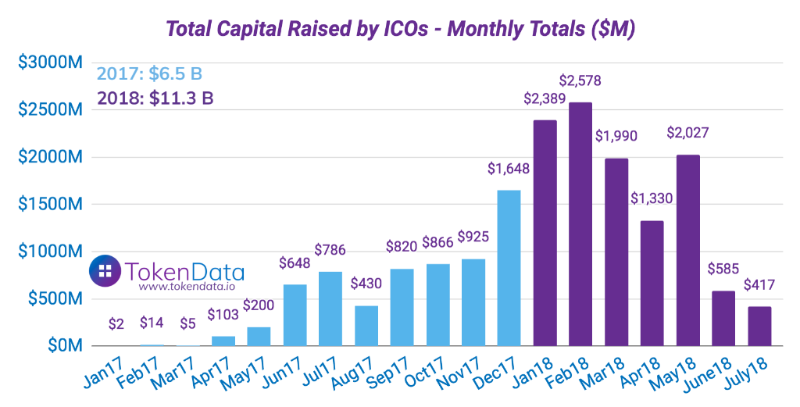 Token and ICO fundraising continued a steep decline in July 2018. 40 ICOs and (private) token sales raised a total of $417M – down from $585 Million in June and $2 Billion in May. This is the lowest monthly amount we’ve measured since May 2017.

A closer look at the data reveals the following:

* Dataset consists of all traded ICO tokens an www.takendata.io
** Returns are calculated assuming that someone invested 1 USD in every ICO and put 1 USD in ETH and BTC at the same time in separate portfolios. There is no rebalancing or weighting.

It’s safe to say that the correction in cryptocurrency prices and increased regulatory attention have finally had an effect on the ICO market. Although we’re hesitant to pronounce “the death of the ICO” we believe that the corrections in both new capital and trading activity are well-needed and long overdue.

The Decay of Token Prices 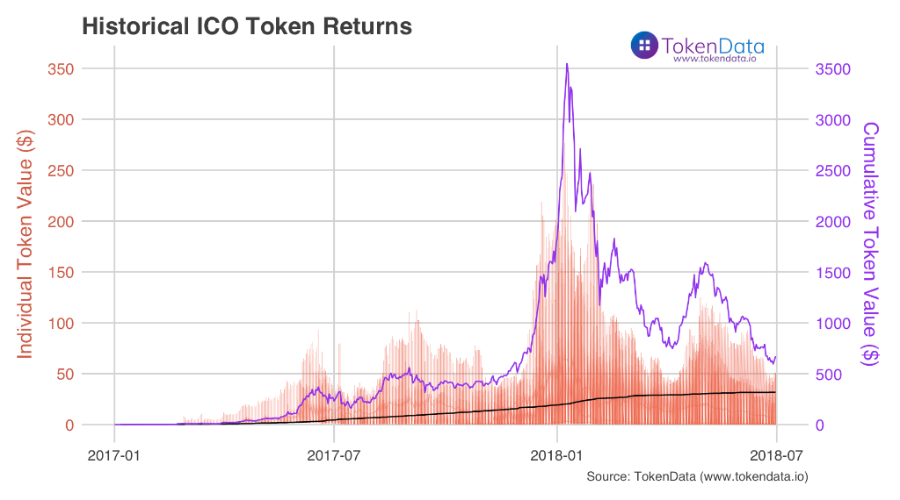 In addition to calculating the returns by ICO date, we’ve done a full historical analysis of more than 300 ICOs that have taken place since January 2017. As shown in the graph above, the individual tokens (in red, left axis) traded as high as 200-250 times their original ICO price during December 2017 and January 2018.

But – as cryptocurrency markets have corrected – the combined value of these 300 tokens has dropped by more than 80% since the peak in Q1 2018. A hypothetical cryptocurrency portfolio consisting of all 300 tokens would now be worth ~$600 versus $3500 at the peak (in purple and right axis). While this $600 is still double the original investment of $300 (black line), we highly doubt that we’ll see the levels of Q1 2018 soon or ever again…

*If you have questions about this analysis or any data-related queries, reach out to our research team ([email protected])!

**Methodology is as follows